I’ve been going to the Disney parks for as long as I can remember, despite growing up in San Jose. In nearly twenty-two years of frequent visits, I’d like to think that I’ve acquired a somewhat decent amount of knowledge about the parks. With that being said, there are so many activities and rides in both Disneyland and California Adventure that are seriously underrated. Everyone knows that Pirates of the Caribbean is a great ride and the Haunted Mansion is a can’t miss. California Adventure is also full of underrated experiences that people blow by on their way to Cars Land. Look no further: I’ve rounded up some of my favorite underrated rides and activities at the Disneyland resort. 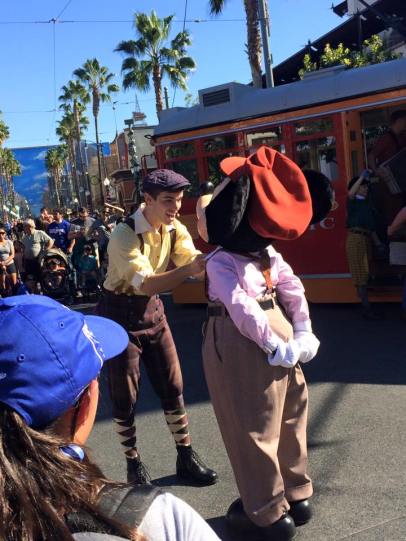 The newsboys in DCA are on my must-see list whenever I’m in the parks. The show hasn’t changed since it began, to the best of my knowledge, and it’s centered on 1920’s-era newsboys (and girls!). It starts out with the Newsies singing inspirational songs about seizing the day and making it big. They joke around and call out headlines about Walt Disney’s arrival to California and even Mickey Mouse. Even the Mouse himself joins them for the last few minutes of the show! One of the reasons why the Newsies are so great, at least to me, is that they truly interact with the audience, regardless of age. Like all Disney songs, theirs are catchy, and my mom and I have found ourselves singing “A suitcase, a suitcase, a suitcase and a dream!” for the rest of our trip. Cute singers and dancers, inspirational songs, and Mickey Mouse? 10/10!

I seriously do not understand why this ride NEVER has a line. I’m not even kidding when I say that the longest I’ve ever waited for this ride was five minutes. One day I went on three times in a row. In the middle of summer. On a crazy packed day. I don’t understand. The outside of the ride is gorgeous, the workers have cute costumes. While the ride isn’t as cool and I mean like physically cool as Pirates, the ride is cool and a relief on blisteringly hot summer days. Plus, the little mermaid! It’s a short ride, but very fun. It never fails to put a smile on my face, and and I don’t understand why it isn’t more popular. 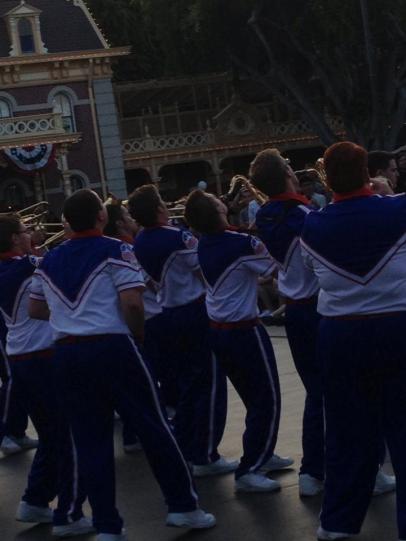 This is something only around during the summer time. I first saw the DCB when I was a senior in high school, and I fell in love with it. The band, which is usually around twenty or so extremely talented college students, play classic Disney songs all around the park. The energy of the band, how good-looking the members of the drum line were….well, there’s a reason why I always make sure to catch a performance any time I’m back in Disneyland for the summer.

The Winnie the Pooh ride

Look how cute this little Hefflaump is!

The Imagineers for this ride had an insane eye for details

Another ride that almost never has a line, the ride designed after everyone’s favorite “silly old bear” is tucked into Critter Country, near the entrance to Splash Mountain. It can be easy to miss the Winnie the Pooh ride also because Tigger, Pooh, Eeyore, and sometimes Rabbit are seemingly always available for pictures by the entrance to the Winnie the Pooh-themed store. But look at it this way- if you go on the ride, you exit practically inside the store, and the characters are still waiting for you when you get out! I haven’t seen an episode of Winnie the Pooh on TV in over a decade (Is it still on the air? How old am I?!?) but going on this ride never fails to transport me back to my childhood.

Tucked away on the right side of the castle if you’re entering from Main Street, Snow White’s Grotto is so much more than just a shortcut to Fantasyland. There are statues of the dwarves and Snow White and her animal friends on the side of the hill, and if you listen really closely, you can hear Snow White singing. Just like in the movie, there is also Snow White’s wishing well. If you lean over it, and close your eyes, and listen really carefully, you might just hear a beautiful voice singing about wishing for her prince. This wishing well is no ordinary well. All money-wishes-dropped in the well is given to Make-A-Wish. If that isn’t enough to get you to visit the grotto, this next fact might. The grotto is often a spot to meet characters. I personally have met Peter Pan, Sleeping Beauty, and the Fairy Godmother there, and that’s just the ones that I remember. So, visit the grotto, make a wish, do good for others, and your wishes might come true.

Okay, I might be crushing some spirits with my next sentence, but in my defense, if you didn’t know what I’m about to say already, then you have bigger problems than Disneyland spoilers. The castle in Disneyland is Sleeping Beauty’s castle. Cinderella’s castle is in the Magic Kingdom at Walt Disney World. I’ll let you have a few moments to collect yourself. Everyone good? Okay. Moving on. If you’re walking through the castle from Main Street, the Walk-Through will be on your left. It’s a great way to cool down during a hot day, a good way to kill time if you’re waiting for a fast pass, or a great experience if you want to escape the hustle and bustle of the park for a few minutes. The 3D images and the interactive parts are well-made, and truly make you feel like you’ve stepped inside the story. I might be slightly biased because Sleeping Beauty was always my favorite growing up, but take the literal five minutes and do the walk-through. You’ll thank me later.

I hope you decide to go on one of the rides or see one of the shows that I suggested! Everything in Disneyland is wonderful and magical, but I feel that discovering something new in the parks can be even more so. Let me know in the comments what you think!

This is a text widget, which allows you to add text or HTML to your sidebar. You can use them to display text, links, images, HTML, or a combination of these. Edit them in the Widget section of the Customizer.
Loading Comments...
%d bloggers like this: